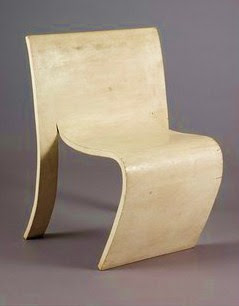 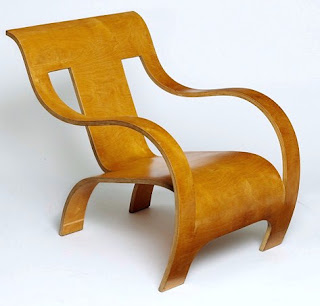 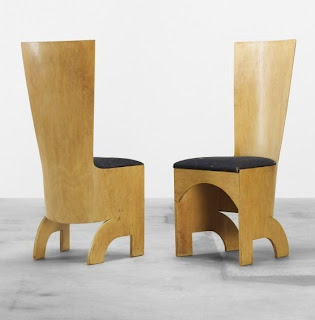 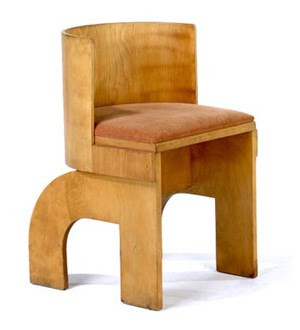 Bent ply furniture from early 20th century designer Gerald Summers who established a company called 'The Makers of Simple Furniture' with his wife Marjory Amy Butcher in 1929 which ran until 1939 when government restrictions on timber importation forced them to close.
The strength of Gerald Summers design was his simplicity and economy of designs, which often meant that there was no wastage. The chair would be formed by a single piece of aeroplane ply, as you can see in the top two images, the ply would be formed from many layers of veneer in which the grain ran in different directions creating integral strength. These were not steam bent, the pliable veneers were sandwiched  together with glue and then placed in a mould whilst still flexible.

"This exceptionally thin and flexible material had a revolutionary impact on Summers emerging style. Whereas Summers had previously worked in a geometric idiom of simple rectilinear forms, with his discovery of aeroplane plywood he began to evolve an organic idiom of curved surfaces and curvilinear outlines, which exploited the inherent capabilities of this pliable material." Martha Deese. Journal of Design History

Gerald Summers work has much in common with Finnish designers Aino and Alvar Aalto's furniture of the same decade.
Posted by Hazel Terry at 10:56