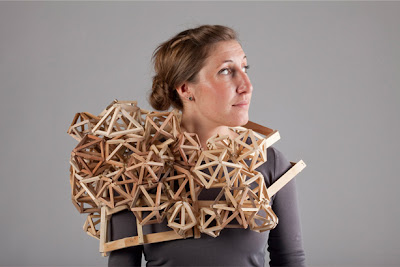 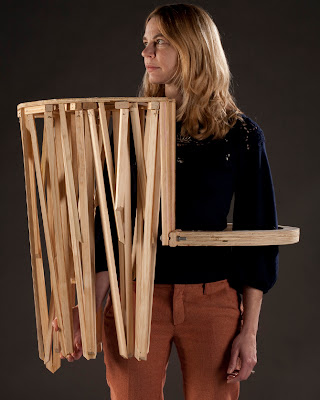 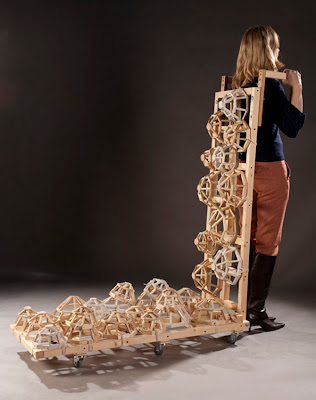 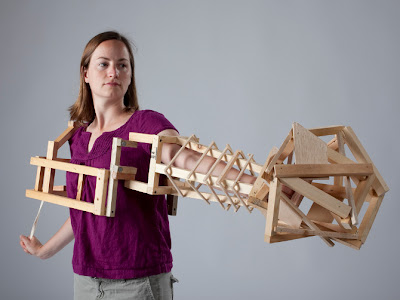 Tracy Featherstone's 'Wearable Sculptures are hybrid creations that include visions of architecture, fashion, furniture, jewelry and sculpture. She is exploring these rigid structures in relation to the mobile wearer and their sense of control.
"Wearble Sculptures materialize our daily struggle between control and chaos. The balance is precarious and can tip one way or another in an instant.  Building materials traditionally used to construct living environments or other architectural securities are used in a frenetic fashion.  Quickly, and maybe hopelessly trying to impose order on a situation that is moving out of control.  The traditional role of structure or stability becomes mobile when placed on the figure allowing the individual to indulge in the illusion of stability.  The mobile/wearable element of the work further subverts attempts of control and order.  Similar to the way water will carve a new path around an obstruction, participant finds new ways to move about daily routines in ordinary fashion." Tracy Featherstone
Posted by Hazel Terry at 08:41